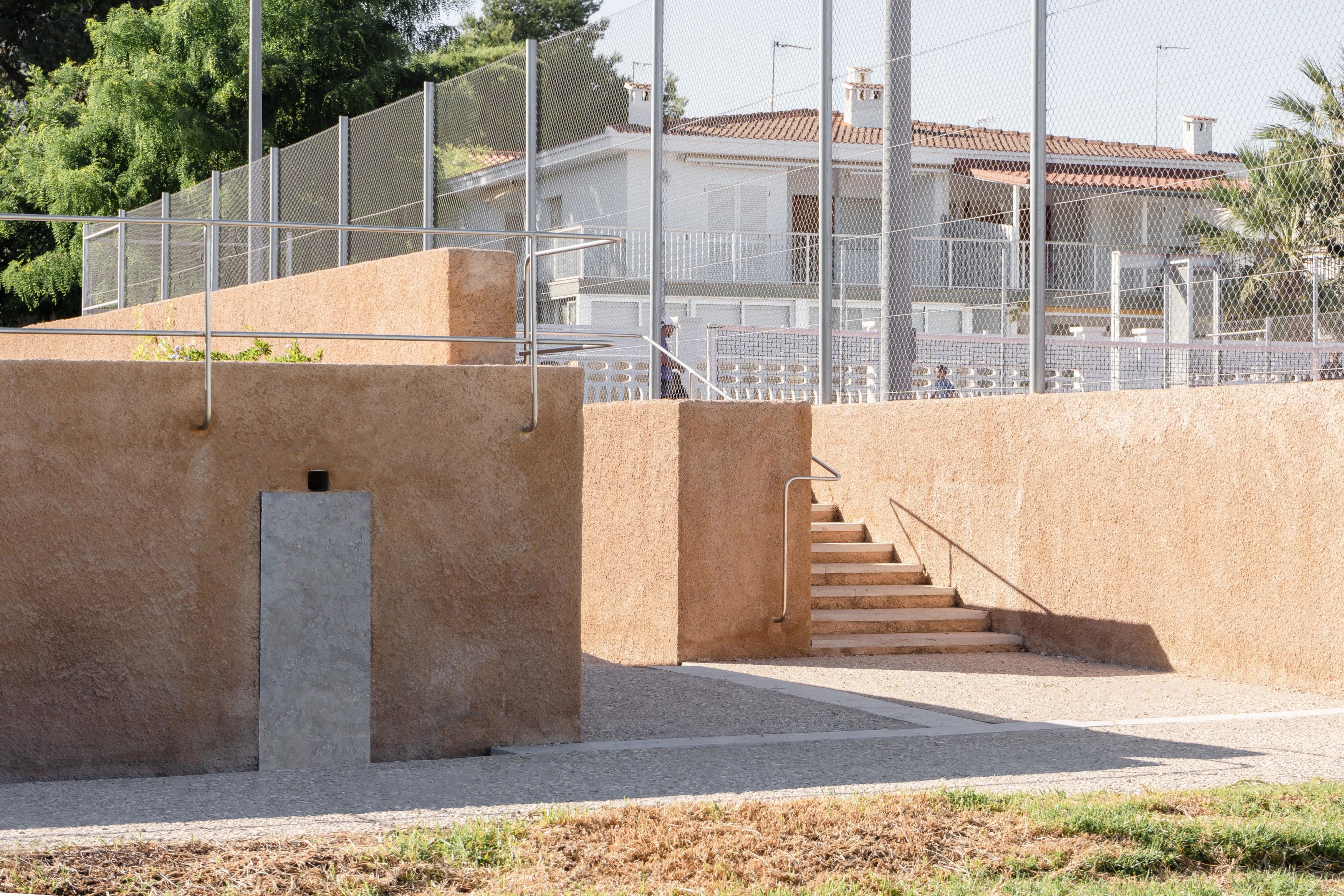 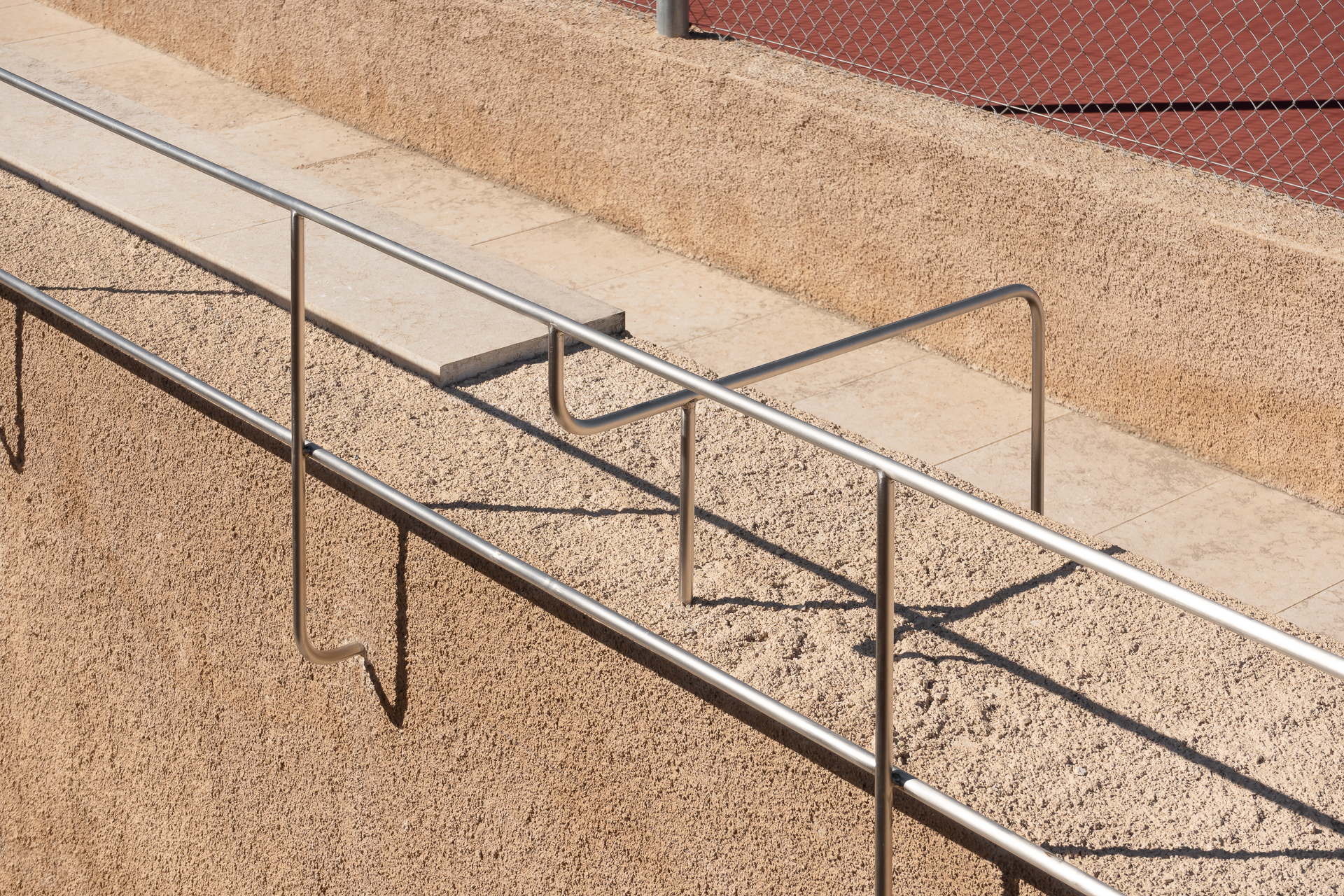 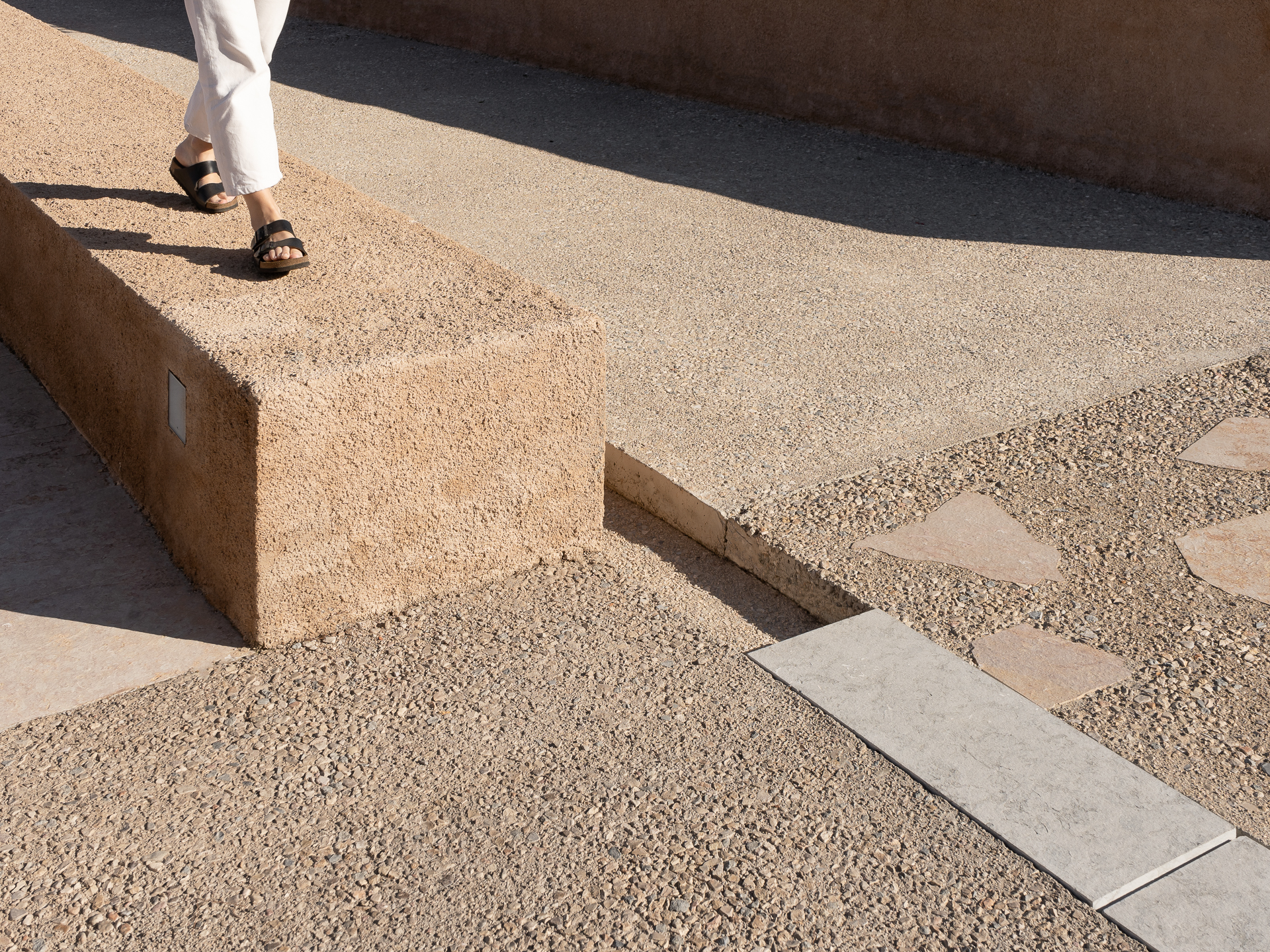 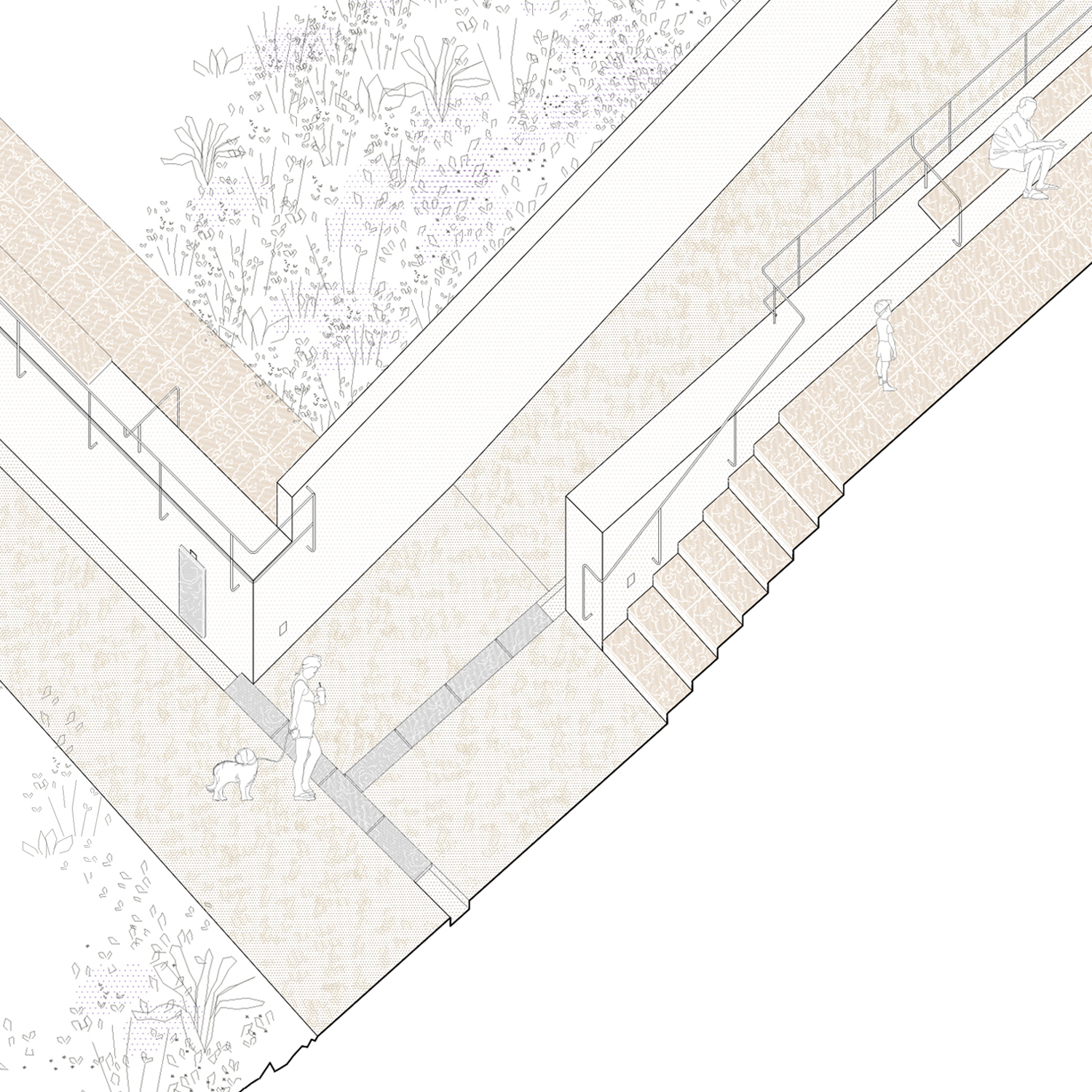 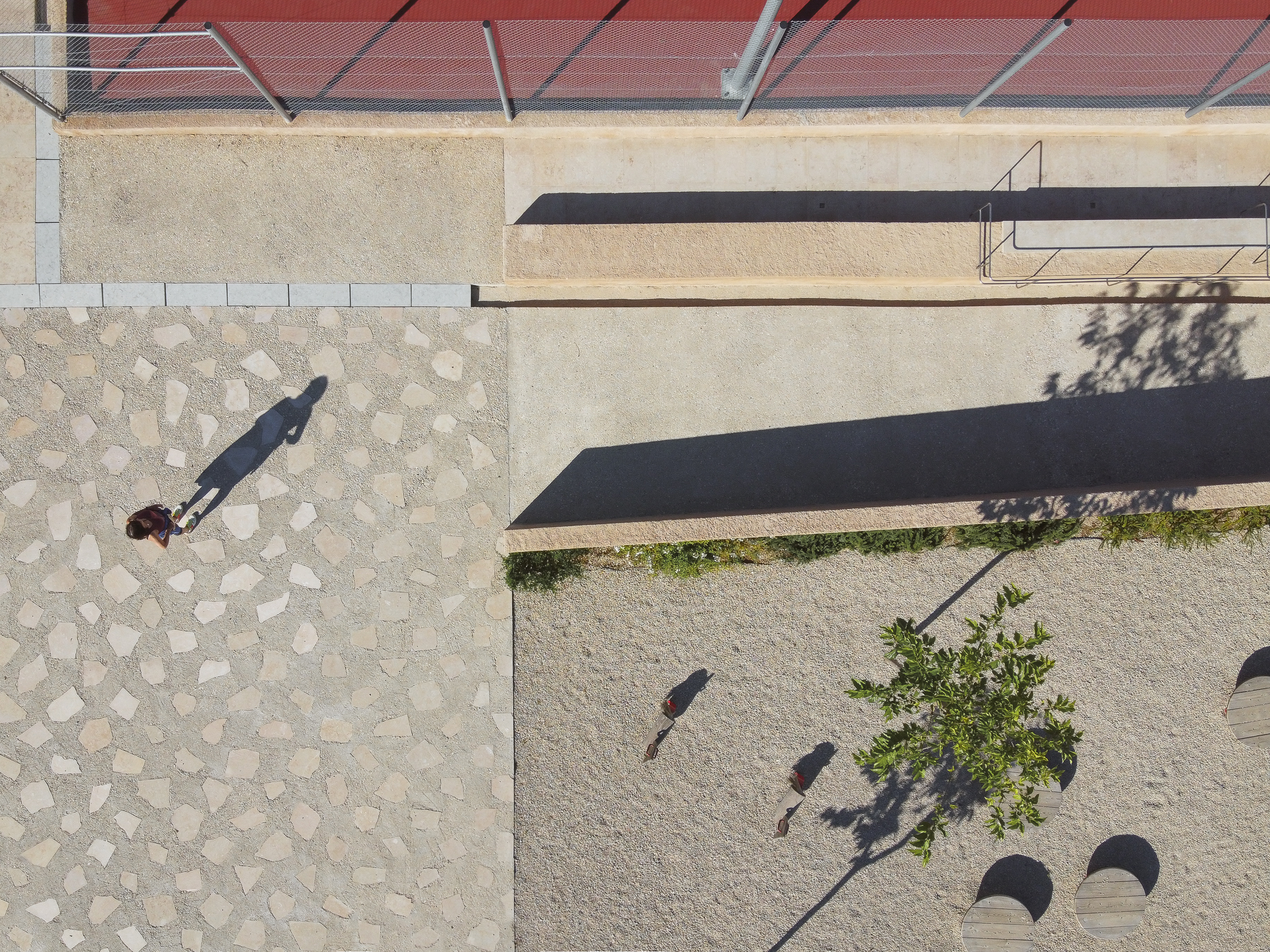 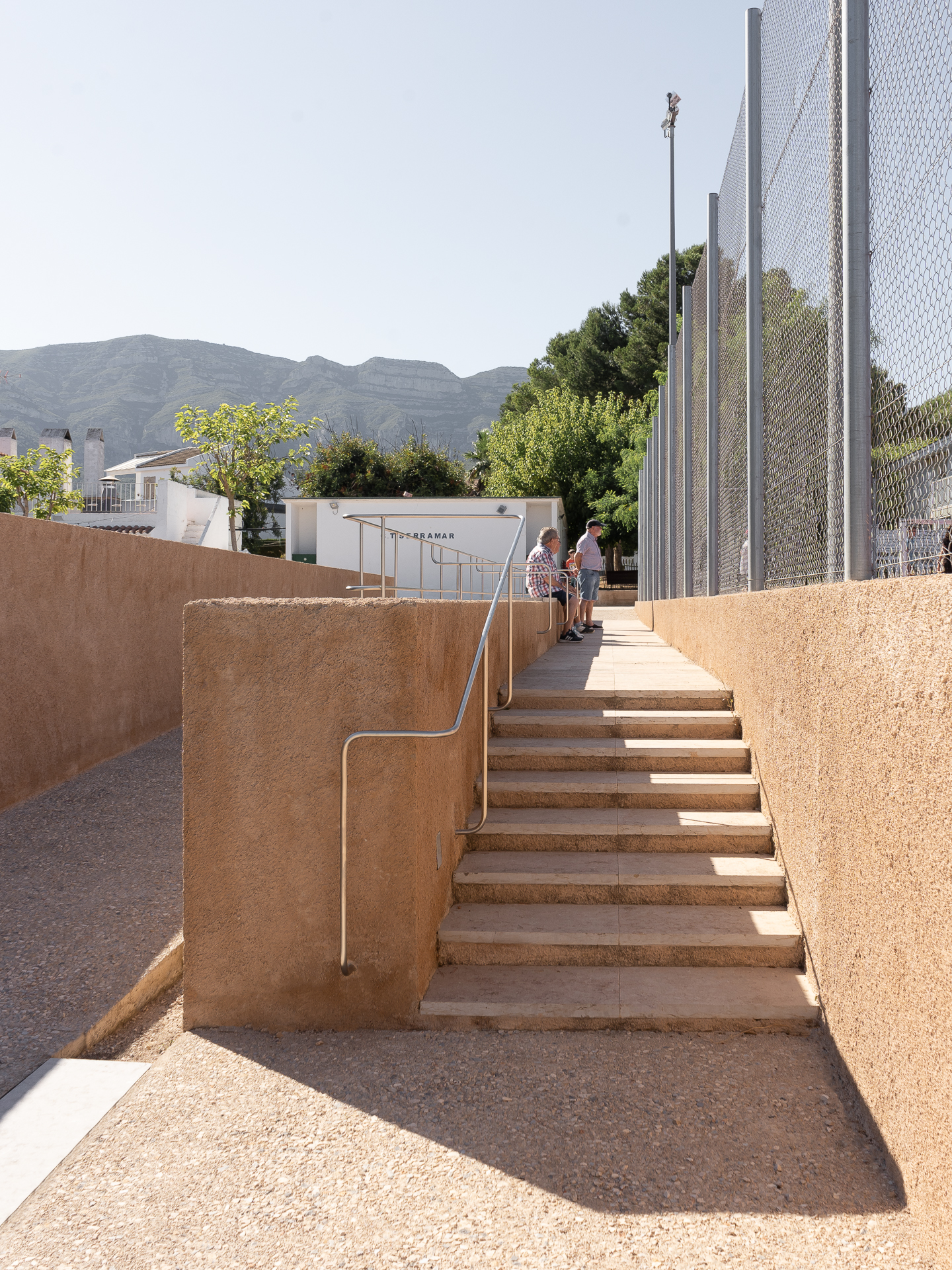 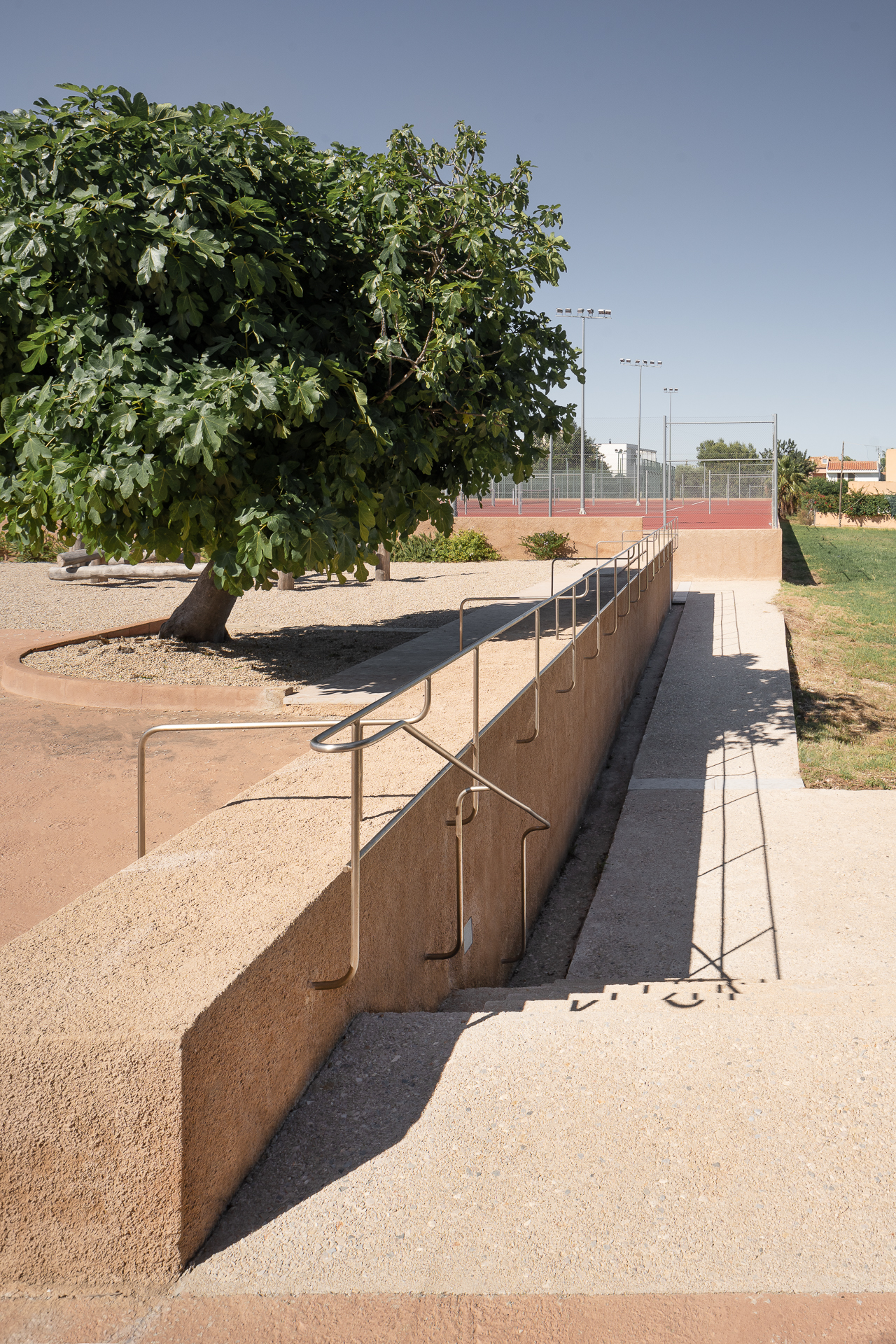 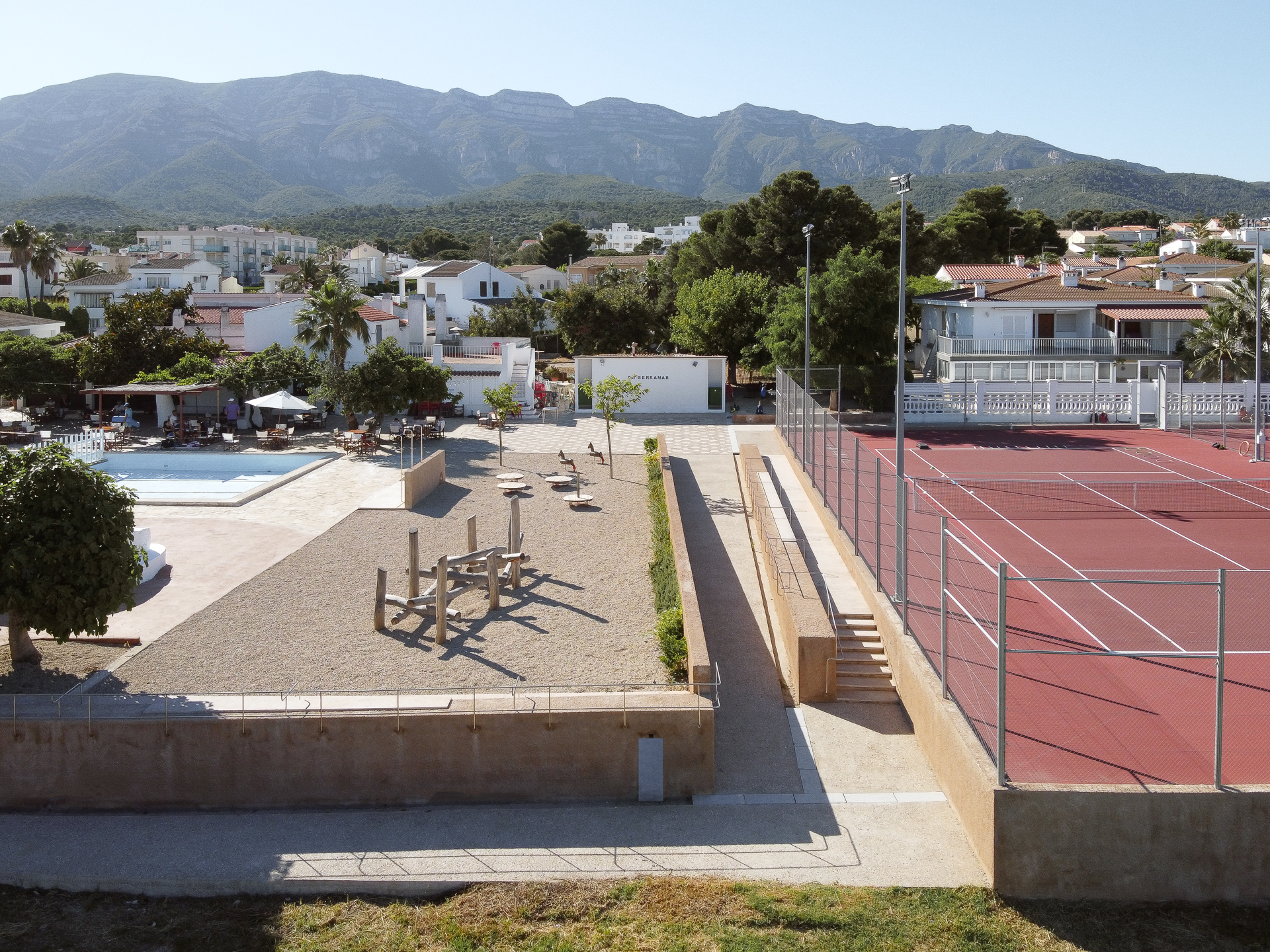 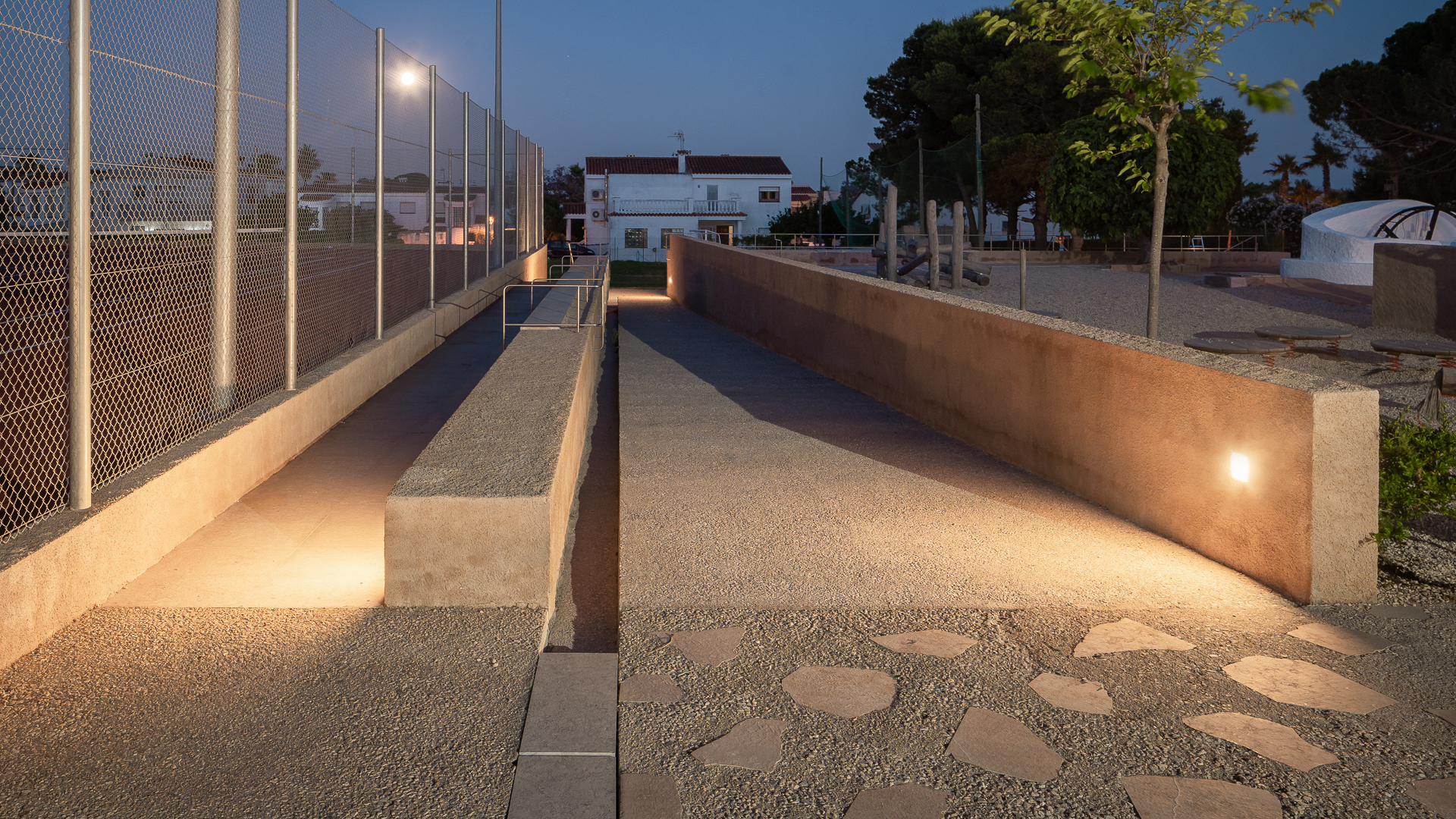 Landscapes in the meantime

During the preliminary phases of a project to transform a touristic compound in the coast of Montsià, the client informed us that he would undertake an urgent task without architects: the restoration of four deteriorated tennis courts. We convinced the client to draft an “express project” to improve the courts’ surrounding, and, to embellish the landscapes in the meantime.

The exterior spaces of a historical, rural construction (masía) – currently surrounded by suburbs built in 70’s – had been reduced to residual interstices located between autonomous pieces for touristic use: four tennis courts, the terrace for a restaurant, a pool, and a solarium, all of which are excessively close to each other. The project which does not respond to a predefined problem, asks instead a crucial question: what is to be done?

De-urbanize, drain and cycle the water

We suggested doing away with one of the tennis courts to increase the surface drainage in front the masía. Then, we used the large surfaces of the courts and the paths surrounding them to improve the flow of water. As a result, water conduits were built to capture runoff during the seasonal bouts of rain, and to feed this water into an underground reservoir, used to irrigate the property’s green areas. These, in turn, are largely populated by autochthonous species, which require very little water and are salt-tolerant.

Taking the agricultural terraces in the surrounding territory as models, the project consolidated two large topographical platforms: of the three tennis courts and the area that encompasses the pool and the outside garden. These platforms function as the permanent settings for a series of changing activities.  No soil was extracted during the construction of these platforms, and instead, the terrain was shaped into terraces and, to reduce the residue generated, the remains of the former courts were used to stabilize the new ones.

Cuts, scraps and gravel from Sénia

Above all, the constructive phase of the project involved delineating the borders of the platforms and the intervening space between them: permanent walkways, small corners, and a gently sloped ramp that connects these spaces to the football field in the lower level. These borders and walkways form part of the compound’s permanent foundations. For their construction, we used stone from Sénia – sourced from a quarry in Ulldecona only 10 km away – that was used in all of its possible forms, thus avoiding the unnecessary generation of rubble. To define important meeting spots, the project uses cut stone of standardized dimensions as ‘carpets’ of sorts. Then, the fragments generated in the cutting of stone were repurposed to extend an already existing ‘pavement of fragments,’ and were embedded in the floor following a pattern of structured randomness. Gravel, in turn, was used as a drainage surface and as an exposed aggregate of the water blasted concrete. Finally, in its smallest format – as sand – the stone was used for the traditional renderings of the walls.

← Prev Next →
Project
Bajet Giramé produces spatial concepts and built artefacts through the execution of architectural and urban projects, teaching, research, exhibitions and publications. Our work intends to unveil fresh and ambiguous relationships between infrastructure and appropriation, concreteness and uncertainty, vernacular and digital, ecology and poetics, uselessness and politics. We believe architecture shall perform as a catalyst of joyful unexpected possibilities.

Apr. 2021. Our project Les 3 Maries has been published in the Ara newspaper!!!  ● Mar. 2021. New Generations website published our Studio Profile on their platform!! ● Dec. 2020. Our lecture “Assembling” at ETSAB is online. ● Oct. 2020. “Unveiled Affinities: Quaderns in Europe” has received two AJAC awards, in the categories of Ephemeral Architecture and Architectural Dissemination!! ● Sep. 2020. Our project Quiró published in La Vanguardia! ● Apr. 2020. Lecture “Club Sandwich” with Feina Studio. ● Jul. 2019. We’ve won the competition to be directors of Quaderns d’Arquitectura i Urbanisme issue nº274! ● Previous news

Maria Giramé (1987) and Pau Bajet (1988) established Bajet Giramé in Barcelona in 2017, after a period of four years in which they both worked as architects for David Chipperfield Architects in London. The studio is a collaborative platform developing a wide range of projects together with a great diversity of partners, consultants, collaborators and clients. Current projects include 83 social dwelling units, an elderly residence and a district community centre for the Barcelona Council; a 2ha rural campsite near Ebre’s river delta; a 27 ha urban expansion for the municipality of Alcanar; as well as several retrofit projects for domestic and office spaces.

Bajet Giramé combines professional practice with research and teaching in universities in Spain and the UK. We believe in the role of architectural design as a research tool to unveil new knowledge. Transdisciplinar and transscalar everyday spatial practices, that we carry out through housing commissions, exhibition curatorship, furniture design, teaching, essay writing, urban planning, or drawing on paper.

In 2015 Pau was awarded La Caixa Fellowship for Postgraduate Studies to fund a doctorate ‘by design,’ currently in its latest stages, supervised by Florian Beigel and Philip Christou, at The School of Art, Architecture and Design at London Metropolitan University.

Pau runs a Design Studio at the Housing & City unit at ETSAB (Barcelona School of Architecture, UPC), since 2017. This third-year course, consist of a project studio where undergraduate students develop urban and dwelling prototypes to enhance both civic life and domestic joyfulness.

Maria is currently teaching a Construction Studio at ETSALS (School of Architecture La Salle). This studio for third-year undergraduate students, consists of a workshop where they develop a project in detail, exploring constructional thought, technique and representation awareness.

Pau is currently teaching, in partnership with architect María Langarita, the Social Logics Workshop at MIAD (Master in Integrated Architectural Design). In this workshop students explore fresh prototypes for living in common, based on large-scale civic supports open to human and non-human intersubjective forms of appropriation.

Apr. 2021. Our project Les 3 Maries has been published in the Ara newspaper!!!  ● Mar. 2021. New Generations website published our Studio Profile on their platform!! ● Dec. 2020. Our lecture “Assembling” at ETSAB is online. ● Oct. 2020. “Unveiled Affinities: Quaderns in Europe” has received two AJAC awards, in the categories of Ephemeral Architecture and Architectural Dissemination!! ● Sep. 2020. Our project Quiró published in La Vanguardia! ● Apr. 2020. Lecture “Club Sandwich” with Feina Studio. ● Jul. 2019. We’ve won the competition to be directors of Quaderns d’Arquitectura i Urbanisme issue nº274! ● Previous news